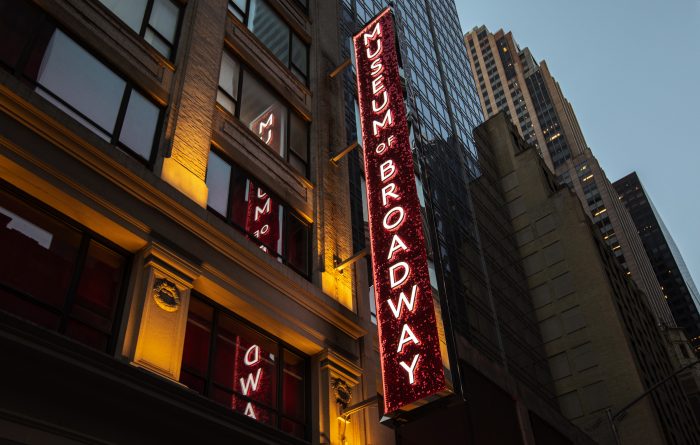 Just steps from Times Square, visitors to the Museum of Broadway step back through nearly 150 years of legendary productions and see up close iconic memorabilia.  They step through a Stage Door for “The Making of a Broadway Show.” They can even step into landmark shows, like RENT, for centerstage Photo Ops.

But The Museum of Broadway is not some NYC tourist trap.  It is four floors, 26,000 sq feet of brilliantly designed, curated, and sometimes goosebumps inducing interactive exhibits of all things Broadway – stories, art, innovation, people, controversy, collaboration, and resilience.  And it all starts as so many theatre stories do…

“Up a steep and very narrow stair way…”

One immediately notices the great attention to detail paid to every aspect of the Museum from the moment visitor’s walk up the building’s original staircase with a makeover to look and feel like the backstage stairs of any Broadway house.  While fully accessible by elevator, the walk up to the third floor beginning the tour is filled with the sights, sounds, and ‘insider info” to excite Broadway fanatics and make veterans of Broadway feel a little bit homesick.

But The Museum of Broadway is not just for the fans.  It is for theatre professionals who are and who have earned a living in the industry, aspiring artists who dream of a career, and those who want to learn all about Broadway.

“Let’s start at the very beginning…”

In “The Map Room” an immersive film traces the roots of Broadway in New York City back to 1732 in lower Manhattan.  By the twentieth century, it had progressed north to modern day Midtown when in the 1920s it was dubbed, “The Great White Way” because of the brilliant lights on the marquees its 70 theaters.  By comparison, today there are 41 Broadway theaters.

After the brief film, guests are on a self-guided, self-paced tour through “The Timeline” with museum “docents” providing additional historical information and pointing out the many interactive and immersive features available for guests to enjoy.   It’s worth noting, the museum tour is “one way” i.e., visitors cannot “go back and see something later,” so take your time.  Press materials say to allow 1 – 2 hours for a visit; that being said, I spent nearly two hours on a “press preview” when there was no crowd, and I still didn’t see everything.  Plan accordingly!

“Hats off,
Here they come, those
Beautiful girls!”

How can you not be impressed by seeing actual Ziegfeld Follies Girls costumes more than a century old?  There are dozens of costumes on display, but what makes them so exciting is to see up close the artistry and detail in the creations that can’t be seen even from the best seat in the house.

Also, on display are stunning pieces of “Broadway in progress” like video of Agnes de Mille deconstructing her revolutionary “Dream Ballet” from Oklahoma!, a handwritten outline from West Side Story, and Boris Aronson’s original projection slides from the set of Company.

With a century and a half of history, thousands of productions, and countless artists, the wealth of information, experiences, and perspectives to be wrangled and whittled down into a collective, cohesive narrative for the Museum of Broadway must have been a daunting task.  The successful result is one that maps the major turning points and social influences which shaped the artform, while bringing into their proper place many artists and producers who have gotten lost in that story, particularly those of color.

Suffice it to say, you will find your Broadway story at the museum.  I found one of mine in my playwright idol, Tennessee Williams.   I saw him in the timeline during the 1940s and 50s.   Then later in the 1990s I noticed him again in a display about the premiere of his lost first play, Not About Nightingales which I attended on opening night.  Again, it’s all about the details at the Museum of Broadway.

“What would I do
If I had not loved you?”

The course of Broadway has not only been shaped by its artists but by the difficult times it has gone through, world wars, The Great Depression, but none with more lasting and ongoing impact than the AIDS epidemic.  One of the unique features of the museum are the striking works of art created to tell the story of Broadway like the tribute to those lost and living with HIV/AIDS by Eric Reiger.  A portion of each ticket sold to the Museum of Broadway is donated to Broadway Cares/Equity Fights AIDS.

One of the greatest Broadway stories comes to an end in February when the chandelier will fall for the last time and The Phantom of the Opera takes its final bow.  In another art installation, 13,925 crystals are hung in strands, one for each performance of the Broadway production.  And if you stand in just the right spot, the phantom’s mask reveal itself as if by magic.

“We’ve got magic to do just for you!”

The magic of a Broadway show is a thrilling experience, but countless artist, ideas, crafts people, stagehands, musicians must all collaborate from conception to execution eight times a week to “tell the story.”  Walking through the Stage Door to “The Making of a Broadway Show” visitors are immersed in authentic backstage Broadway. The process of creating a production is blended with the deck, wings, stage manger’s desk etc., used nightly in running a show.  For anyone with this firsthand experience, it’s like being home again.

Designers were still hard at work putting authentic details and final touches on the exhibit during the press tour. I commented to one of them.

“You done an incredible job creating this exhibit.  It’s got everything in a theatre but a ghost!”

Smiling she said, “Who knows?  It is a very old build.”

“White… a blank page or canvass.”

In the first of it’s “Special Exhibits,” the museum is featuring the iconic artwork of legendary illustrator, Al Hirschfeld.  For decades his drawings of theatrical productions and celebrities were arguably the image of Broadway to the world.

If you’re like me and always dreamed of seeing yourself in a Hirschfeld, you still can!  My favorite interactive feature of the museum hands down is “Hirschfeld Yourself” where you can choose from various Hirschfeld hair styles, eyes, noses, and mouths to create a self-portrait on an AD tablet.  When you’re finished it generates a QR code to photograph and your “Selfeld” is yours forever.

Broadway has been called the “fabulous invalid” and the reports of its demise have been greatly exaggerated time and time again.  After surviving an eighteen-month covid shutdown, It’s hard to imagine a better way to celebrate the resilience of Broadway, the passion of its creative artists, or its audiences which are larger than all New York professional sports teams combined than with the opening of its own Museum.   If you love Broadway, you will find your story here; as well as, be immersed in all the stories we share when we come together in the theatre.

Tickets start at $39, plus taxes and fees; group and student rates are available.

The Museum is offering $25 timed tickets and $35 flexible tickets on the first Tuesday of every month. 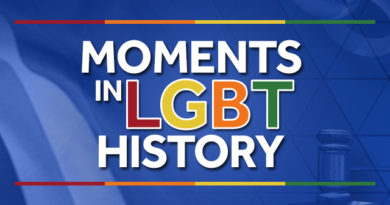 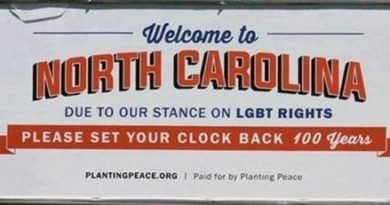 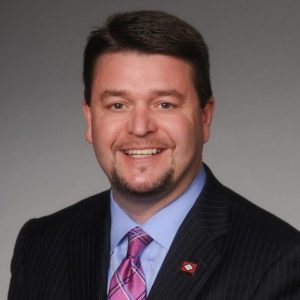