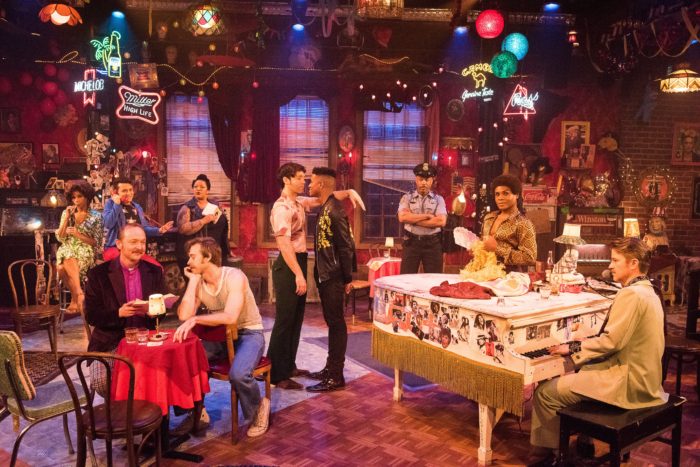 The cast of The View UpStairs (Photo credit Kurt Sneddon)

Those entering the Lynn Redgrave Theater are not simply patronizing the theatre, but becoming patrons of an all but forgotten historic New Orleans gay bar, the UpStairs Lounge, setting of the vibrant new musical, The View UpStairs.  With its three-quarter and on stage seating, the audience is immersed in scenic designer, Jason Sherwood’s 1973 fabulous “busted ass bar” with every shiny bauble, bangle, and bead imaginable, not to mention “a life size cut out of Burt Reynolds naked.”

The audience is not passive in the world before them, but active participants welcomed by friendly, flirtatious, even a bit cruisy, denizens of the UpStairs into “Some Kind of Paradise.”  But that was then; this is now and The View abruptly shifts.

Wes, a young fashion designer, desperate to break through is about to lease the space, now abandoned, rundown, lifeless.  (An effect achieved through one of many impressive visuals in Brian Tovar’s stunning lighting design.)  Then, just as quickly, it’s back to 1973, only now Wes is there too.

This is not science fiction. In fact, one is never quite sure if what follows is hallucination, revelation, or something in between.  But whatever it is, it is the fertile ethos in which composer/lyricist and book writer Max Vernon, cultivates his passionate and insightful new musical.  By allowing people and time to collide, not only in the same space, but the same place; Vernon expresses social insight well beyond his years, raising questions of LGBT survival vs activism and community vs commerce, while maintaining a fierce sense of humor.  “God is perfect, but the man who invented polyester was deeply flawed.”

Max Vernon’s forte is his score which illuminates both the vibrancy and nuance of the spectrum in his character’s lives and emotions.  A similar finesse would serve his book well also, raising its sometimes heavy handed catch phrases and preachy dialogue up to the same level.   A finer polishing would sharpen the story’s arc which tends to compete for attention with the characters “UpStairs.”

Christopher Street circa 1973 had nothing on this “krewe” from Charles Street who finds community and protection in their bar that doubles as a church on Sunday.  They are colorful, broken, hypocritical, flamboyant, but most of all desperate to hold on to what little security they have in a world of hatred and violence directed towards them.  (Sound familiar?)

What could easily veer into stereotypes and “been there, seen that” is thoughtfully guided under the sensitive direction of Scott Ebersold.  The elements of time travel in an actual location with fictitious characters coming to a historical conclusion are a daunting challenge in The View UpStairs; but Ebersold succeeds with flying colors.  From the outset, his immersive staging draws the audience into a world familiar and foreign, tacky and fabulous, joyous and tragic.

The ensemble cast bringing The View UpStairs to life is poignant, sparkling, and in some sequined cases, dazzling, including Taylor Frey (film/G.B.F.) as Patrick; Nathan Lee Graham (film/Zoolander) as Willie; and Michael Longoria (Bway/Jersey Boys) as Freddy, who does unspeakable things with two jack-in-the boxes.

A new musical for even the most seasoned and experienced theatre professionals is a Herculean task; an original musical, not based on a well-known story or title, is almost unheard of in today’s commercial climate.  Max Vernon and The View UpStairs fearlessly takes on both, much like the LGBT Community whose spirit, both past and present, passionately fills The Lynn Redgrave Theatre through May 21st.

The View UpStairs – a new musical

at The Lynn Redgrave Theater  at Culture Project

Lawrence Pfeil, Jr., is a freelance writer/playwright and has reviewed theatre both on and off Broadway as well as films for media outlets including the New York Blade and Edge Publications. 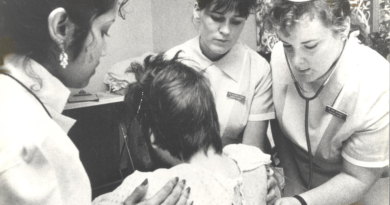 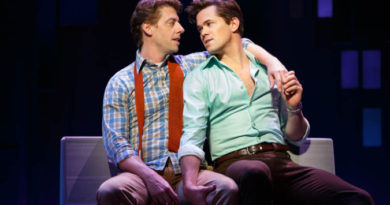 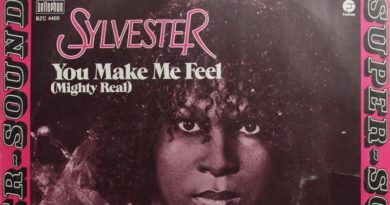 Sounds of Pride: Sylvester’s Disco hit, “You Make Me Feel (Might Real)”