In spite of all this adversity and illegalities the first, The Christopher Street Liberation Day March took place on the first anniversary of the Stonewall Riots, June 28, 1970

The March was organized at the Oscar Wilde Memorial Bookshop by Gay Liberation Front, Lavender Menace, Gay Activist Alliance, and more than a dozen other desperate and radical LGBT groups, forming the Christopher Street Liberation Day Umbrella. One of their major undertakings was producing this flyer announcing and promoting the March.  Its message is courageous for the moment and inspiring still today. 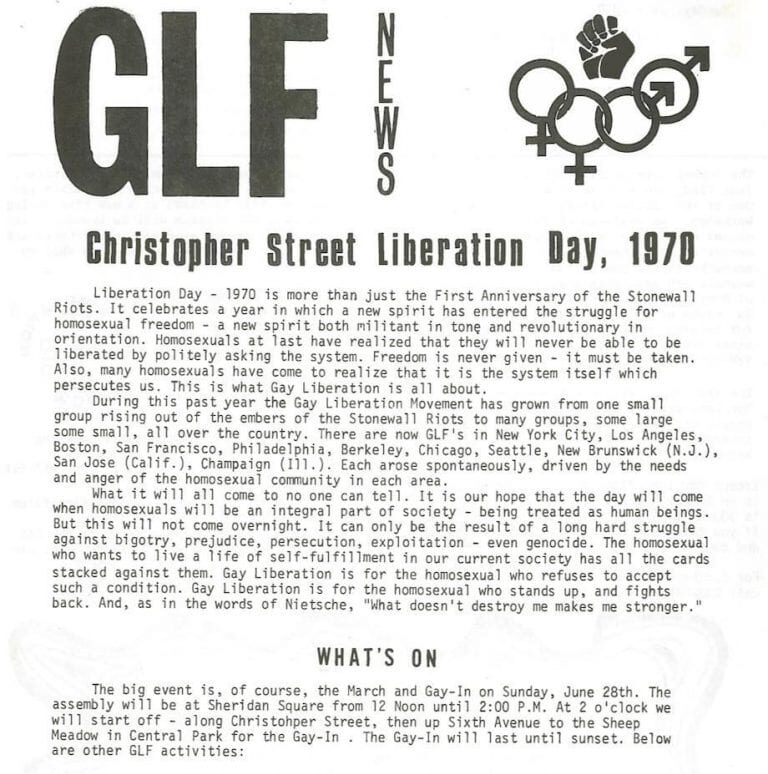 But the success of The March was far from assured, let alone safe and secure from the violence and hate of on lookers and the police whose raid of the Stonewall Inn had started nearly a week of riots. From an interview with The New York Times,

“The Christopher Street Gay Liberation Day March was as revolutionary and chaotic as everything we did that first year after the Stonewall riots. The march was a reflection of us: out, loud and proud. We intended to march from Greenwich Village and up to Central Park. We didn’t have a police permit, so no one knew exactly what would happen — no one knew the type of force that might greet us. So we held self-defense classes and learned how to protect ourselves. As a marshal, I especially had to know how to react and control the marchers if we were attacked. When we reached 23rd Street, I climbed up a pole, looked back and saw a crowd stretch all the way to Christopher Street. Eventually we made it to Central Park, just like we had promised — and us activists transformed a movement from a few ragtag militants to thousand strong. As my friend Jerry Hoose used to say about that year, “we went from the shadows to sunlight.” Today, my original marshal’s badge is on display in the Smithsonian.”

— Mark Segal, Early member of the Gay Liberation Front and marshal of the first Pride march

Unlike the Stonewall Riots we have a good deal of photographic documentation from the first March. Writer Andrew Solomon points out in his article, “The First New York Pride March Was an Act of Desperate Courage”

“What is most striking in these photographs is the expression of relief the marchers seem to emanate. A firsthand account described how the parade started as a gathering of a thousand or so people at Sheridan Square and then swelled steadily as it headed up Sixth Avenue; many seemed to hang back until they realized it was a happening thing, then joined the throng as it went past. Some members of the parade saw compatriots standing on the sidelines, watching; one proclaimed that he would call out on the spot the gay friends he saw who weren’t participating. The burgeoning numbers offered a kind of invisibility to those who joined; in history, they are more a mass than they are individuals — but in some of these photos the specificity of individual people is reaffirmed. My favorite photo is the one of people involved in a sort of line dance, presumably in Sheep Meadow, where the parade wound up as what the organizers called a ‘Gay-In.’”

Here are just a few of those photos 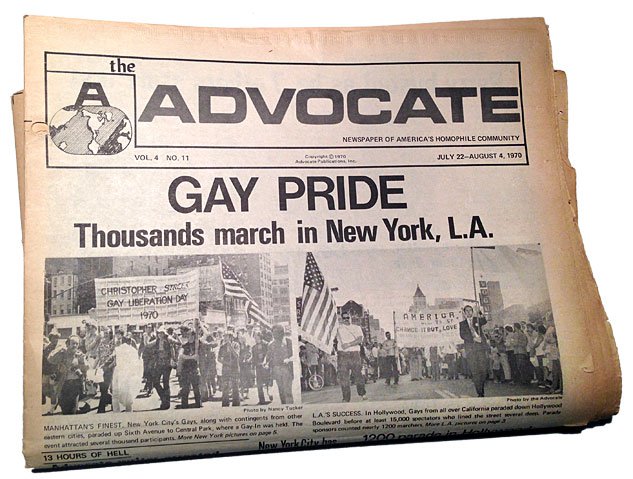 The last weekend in June 1970, also saw Gay rights marches and “Gay-ins” in Los Angeles, San Francisco and Chicago establishing the tradition of “the last Sunday in June” for the gay rights movement for generations to come.  More than just one weekend a year, the LGBT+ Civil Right Movement has become the largest global human right movement in history.  Its achievements are celebrated and the work still to be done are inspired by Marches in every corner of the world as The New York Times recently reported in several firsthand accounts.

“From How the Pride March Made History”

Pride 2020 is wholly different without The March, without thousands lining up in cities great and small to show their Pride and the diversity of our Community.  It’s not the same without crowds in the millions coming together in a show of solidarity and strength to the conservative and religious forces who would keep us down.  It’s not he same being able to show our love and gratitude to those revolutionaries who had the courage to March “proclaiming ‘the new strength and pride of the gay people.”  But it’s better for us to be safely apart today, so we call all be together again tomorrow.

Every life in our Community matters, each and every Black, Brown, Transgender, Lesbian, Gay, Bisexual, Queer proud person who lives and loves proudly under our rainbow.

Readers of theOUTfront may remember, this post from last year.

In the shared post, I wrote about going down to the village to be at Stonewall 50 years to moment the riots began.  I may not be  able to be with our Community this year and celebrate the 50th March, but nobody says I can’t March up Sixth Avenue myself.