“I want you to imagine the first day Donald Trump is not President.  What will that be like?”

My first thought was “still drunk AF,” but Pete Buttigieg’s question was entirely serious.  He was asking thousands of his supports in attendance last night at New York City’s Hammerstein Ballroom to imagine what that day would be like because we are “under reacting to what’s going on today.”

“Under reacting?  Now you’ve really got my attention, Pete.”

As the Democratic candidate hopeful began enumerating the many failings and hypocrisies of the current presidency, I couldn’t help but notice the glint of his wedding band on the hand holding the mic.  It reminded me this is an extraordinary candidate at an extraordinary moment in history, one beyond mine and our Community’s imagination.

Pete Buttigieg is the first openly gay, married man to run for President of the United States.  (has that really sunk in yet?) Until four years ago, married gay man wasn’t even legal across America; and until a few months ago, an openly gay man running for president was quite inconceivable.

But here we are, in the midst of celebrating the fifty anniversary of the Stonewall Uprising and one of our own is a legitimate contender to be POTUS, the leader of the free world.

And here I was, in the city where “Pride Began,” on National Coming Out Day, fifteen feet from the man, Mayor Pete. 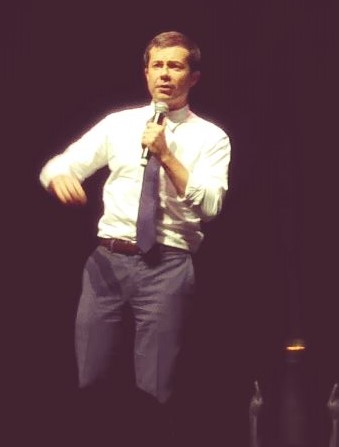 “There is a crisis of belonging in America.  This President has told millions of people in millions of little ways they don’t belong here.”

With that Pete began enumerating his various plans for health care, ending systemic racism, and national service all of which had that common theme of belonging, of inclusion, of becoming united once again.

Policies and plans are important.  They are the blueprint for the work that needs to be done in any administration. But it’s the spirit and vision of its leader that inspires people to share in it and make it happen.  Mayor Pete sees a greater vision of the future because he sees how belonging, not exclusion, is the true strength of our country.

“I recently met a 16-year-old girl on the campaign trail who came up to me and said, ‘Because of you I’m not ashamed to go to school anymore.’  I thought for sure I knew where this was going.  Then she said, ‘I don’t have to be ashamed to have autism.’”

Pete Buttigieg’s campaign is already inspiring the next generation to love themselves which is pretty remarkable for a mayor from Indiana.  But he’s acutely aware there are millions of Americans who feel left out, forgotten, and excluded.  His charge to those of us last night was to get this message out to them. 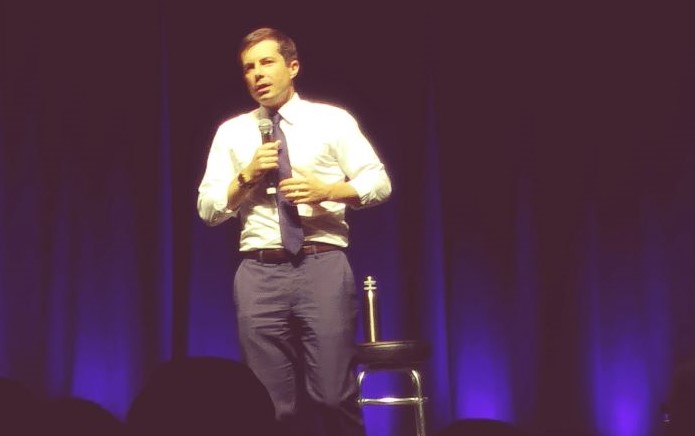 “I ask you to reach out to those you know who have lost hope in politics. Spread a sense of hope in deciding the future…  By 2030, which is not so long from now, we can look back and say, “look what we did.’”

Fifty years ago, protesters at Stonewall fought back giving a sense of hope in deciding the future to a new Community.  Harvey Milk, the first openly gay man elected to office famously said, “You have to give them hope!” Now we have the same opportunity to fight back against hate and division and to give America hope for the future.  It’s been said before, but is worthy repeating,

“what a difference a gay makes”

Sounds of Pride: “Heroes” by the metamorphic, David Bowie