Several years later, I came out as a gay man.  I quickly learned the country I loved, hated me, because of who I loved.  In fact, the Government and its leaders, who I had supported and elected, were advocating for the suppression of my civil rights and persistently legislating to keep LGBT men and women as second-class citizens in America.  It didn’t make any sense.  I had memorized and believed in Thomas Jefferson’s words.

Did I miss something?  Misunderstood what those words meant? I checked Webster’s dictionary for clarification.

No disclaimers, exceptions, or expiration dates there.  Only fundamental facts so clear and plain, they require no explanation.  Tenets of equality and freedom so profound, they became the guiding principles of Abraham Lincoln’s words and deeds, in ending slavery and preserving the Union. Yet, 243 years later, the United States of America fails to live up to even those most basic beliefs as set forth our founders in its declaration.

While Marriage Equality became the law of the land in 2015, today there are 31 states where LGBT+ people have no employment and/or housing protections.  In 2016, Mississippi made it legal for businesses to deny services and accommodations to same-sex couples and their families.  Last year the Supreme Court refused to hear a challenge to that law.

The systemic killing of unarmed black men has become so routine, it inspired NFL players to peacefully protest before their national audience.  But their message got hijacked; bastardized as “disrespecting the flag;” and their platform silenced. What is actually disrespectful to America, is displaying the Confederate flag.  The “stars and bars” is and was a traitorous banner raised to keep millions of African American men, women, and children in the chains of slavery.

If the “Me Too Movement” was about women who have been cheated out of the wages they’d earned for doing the same work as men, it would explode exponentially.   Just imagine telling any man, their company was taking 19.5% of the money he had earned.  He’d call it a crime and rightfully so.  Yet, when women are robbed that way every day, it’s just another assault in the workplace.

This country was colonized by people fleeing persecution in their homelands; who made a life-threatening journey to get here; who were looking to build a better life.  Those refugees were also “illegals” for taking land from indigenous people who had been living on it for millennia.  The United States was founded and built by generations of immigrants who came to its shores and borders believing in the American dream for their children, not an American cage.

Our country is meant to be “the shining city upon a hill;” but, if your skin is brown, its leaders’ bigotry, hate, and hypocrisy has made it a mirage.

There are just 35 words in that ironic passage which has spoken volumes to the world about our American beliefs and values for nearly two and half centuries.  Given the antithetical policies and actions of our current “government of the people, by the people, for the people,” we must ask them, “Which word don’t you understand?” 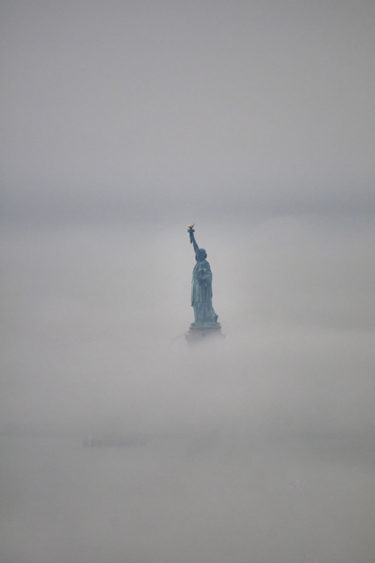