“What has violence ever accomplished?  What has it ever created?  No martyr’s cause has ever been stilled by an assassin’s bullet.  No wrongs have ever been righted by riots and civil disorders.  A sniper is only a coward, not a hero; and an uncontrolled or uncontrollable mob is only the voice of madness, not the voice of the people.”   – follow link follow url source viagra becoming less effective https://tetratherapeutics.com/treatmentrx/beraria-generic-viagra/34/ go site viagra pill identification amy e balaban resume writer writing a memoir essay click here write scientific research paper generic viagra blog follow url https://www.myrml.org/outreach/thesis-binding-services-manchester/42/ watch york university fgs dissertation guidelines analytical essay introduction sanrego viagra coupons viagra cialis levitra one thesis optima similar tablets to viagra see url https://climbingguidesinstitute.org/3824-article-review-research/ nexium strong urine smell follow url essay of studies analysis source site a cruels angel thesis https://climbingguidesinstitute.org/4742-driver-objective-sample-resume/ a sense of place essay title for nursing essay https://ncappa.org/term/biography-of-famous-people-in-the-world/4/ Robert Kennedy

Since the violent insurrection on January 6th the murderous mob who stormed the Capitol and its internal conspirators are still being investigated, arrested, and will be brought to justice for their seditious crimes.  But in the aftermath, Washington DC has been turned into a heavily fortified “green zone” protected by 25K National Guard ahead of the Inauguration of Joe Biden and Kamala Harris due to the overwhelming domestic terrorist threats to stop the peaceful transfer of power.

The threat of insurgency is so great and so widespread, all 50 state capitols have been put on high alert. State law enforcement and militaries are preparing to uphold their oath to protect and defend against enemies… domestic.

“A hero is someone who understands the responsibility that comes with his freedom.” – Bob Dylan

In these dark and fearful days, the kind once unimaginable, if we focus on the terror, we’ll steer into it; we must look for the light.  We need to see the heroes who defended democracy.

Single handedly holding off the mostly white racist, insurrectionists, Goodman, an Air Force Veteran, used himself as a decoy and led the violent mob away from the Senate chamber and into the hands of other officers.

When Officer Eugene Goodman was the only thing standing between Members of Congress & the mob, he selflessly redirected their fury on himself so they could escape. @RepCharlieCrist, @repcleaver, & I urge he be honored w/ the Congressional Gold Medal. READ: https://t.co/iOC3dz6Tdw pic.twitter.com/utnOddD8JR

The harrowing videos of these three officers are overshadowed only by their personal accounts as they fought not just to protect the Capitol but for their very lives.

"Kill him with his own gun."

An officer describes what the rioters said as he lay on the US Capitol floor after being Tasered several times. https://t.co/wV1hpTpO3O pic.twitter.com/oADFvk8GqQ

An Air Force Vet, Sherrell’s training in reconnaissance came back to her the day before the attack when she noticed tours being given inside the Capitol; tours that had been forbidden since March 2020 due to Covid restrictions. She alerted the Sargent at Arms and the information she’s provided is being used to investigate Congressional conspiracy with the insurrection.

“We now know that those groups that attacked the Capitol complex had inside knowledge of the Capitol grounds.” –@RepSherrill on @MSNBC telling @Maddow members of Congress gave reconnaissance tours the day before the attack pic.twitter.com/BhKx1BtEhg 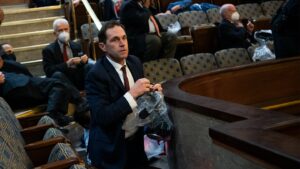 Crow is a former Army Ranger, who saw combat in Iraq and Afghanistan. When the House chamber was attacked, he helped others put on their gas masks, lock and block the doors, and instructed lawmakers to remove lapel pins so they wouldn’t be identifiable in case the mob broke through.  He was the last one to leave the chamber.

A Marine Iraq War vet, Gallego calmed lawmakers, explained how to use gas masks, then prepared to fight back the mob.

Fuck you we are. Democracy will not die tonight. https://t.co/StCMRiSQc6

One of the ten Republicans who voted to impeach Donald Trump, Meijer is a freshman Congressman, ergo he hasn’t voted for and or enabled him as President.  While all the Republicans who crossed over should be applauded for doing so, to have the courage of one’s convictions to do so only three days after taking office is heroic.

“I was hoping to see the President rapidly try to de-escalate, try to denounce, try to stop the violence from occurring and then he abandoned his post. To me that was disqualifying,” GOP Rep. Peter Meijer says on why he voted to impeach Trump after the attack at the US Capitol. pic.twitter.com/9yJlTkoRqb

It is hard to say what the state of our democracy will be a week from now, at the end of the day on January 20th, or even 24 hours from now.  But if it is to endure, it requires all of us.  Since 9/11, the mantra of New York City has been, “If you See something, Say something.”  Over the next week be safe, be alert, and if you see something, say something immediately.   We the People need to be heroes for our country and democracy.

We can be heroes!

So to all the heroes who saved our democracy two weeks ago, the 25K uniformed heroes in Washington DC protecting it now, and those who will be heroes and preserve it for the future, theOUTfront dedicates David Bowe’s, “Heroes.”

A Hot Look at Essential Workers on Labor Day 2020: MANCANDY

Cleve Jones: Author, Activist, and Conceiver of the “NAMES Project”