It has been a week since Donald Trump gathered tens of thousands of his MAGA supporters in Washington DC; incited them into seditious terrorists directed at the Capitol; and in a murderous rampage, attempted to overthrow the government of the United States.  Every day the details of the violent insurrection and the growing list of traitorous elected officials, civil servants, service members, and even a gold medal Olympian involved become more horrifying as do the images and video from inside the attempted coup. But today there is, one which for me, is shocking beyond all others.

Hundreds of National Guard troops sent for protection sleep whenever, wherever they can inside the US Capitol. What’s so disturbing is they’re not there to defend it from any foreign attack like WW II, or any radical Muslim extremists’ attack like 9/11.  These men and women of our armed forces are encamped beneath the rotunda of our democracy and line Statuary Hall of our Republic, are prepared to defend the Capitol of the United States of America from an armed attack by its own insurgent citizens.

Let that sink in.

American forces have taken up arms inside the Capitol prepared to fight Americans who are planning again to forcibly take it over.  That kind of preparation for an attack on Washington has not happen since the Civil War when the battle line was a mere stone’s throw from Capitol Hill.  What’s more, there are currently more active duty personnel defending the Capitol than in Afghanistan, Iraq, and Syria combined.

Our military stands ready to “support and defend the Constitution of the United States against all enemies, foreign and domestic… [and] bear true faith and allegiance to the same;…”  They stand against homegrown, domestic terrorist who have been radicalized by Donald Trump who gave them validation and a home to their hate and violence inside his White House and a Republican party who protected and fed the fascist beast for years.

We need to rethink our nation’s motto, “E Pluribus Unum,” “Out of Many, One.”

A debate raged in the House of Representatives over a second impeachment; a furious trial in the Senate is surely to come; and scores of Republicans still cling to their lies and baseless assertions of election fraud which flamed the fires of conspiracy and sedition.  Therefore, I suggest a new motto, “E Pluribus, Qui.” “Out of Many, Who? as in “Who are we?  not who have we become; white supremacy, xenophobia, and dominionism have been with this nation from its inception.

Who are we that the National Guard sleeps inside our Capitol beneath a bust of George Washington who established the peaceful transfer of power? 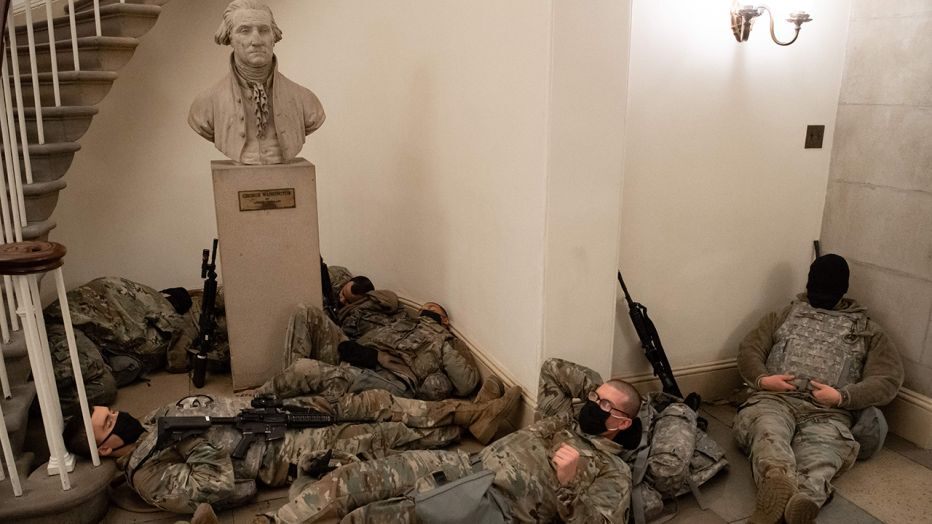 Who are we that they now sleep beneath the gaze of Abraham Lincoln who said, “A house divided against itself cannot stand?”